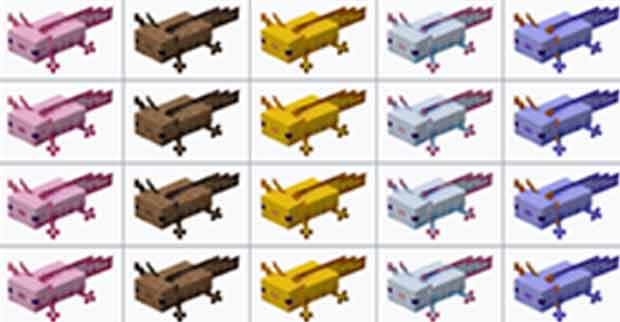 In this post I’ll tell you how to make rainbow axolotls in Minecraft, like jeb_ sheep. It will make an axolotl constantly change their color (variant).

What axolotl colors are there in Minecraft?

At the time of me writing this post, 5 colors (variants) of axolotls exist in Minecraft: pink, brown, gold, cyan, blue. I recommend reading the Minecraft wiki article about axolotls for more accurate information. Here’s a screenshot from the wiki with the colors: 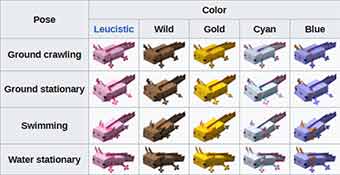 Changing the color (variant) of an axolotl is possible via Minecraft commands. The data command is perfect for this. We will use it to modify the variant variable that axolotls have and set it to the value of the color that we want. To save your time, I’ve included the commands:

Note that the above commands will change only one axolotl and only the one named jeb_. If you don’t want to name your axolotl “jeb_” you can either remove the ,name=jeb part of the command or change it to a name of your choice.

How to make a rainbow (jeb_) Axolotl

To make a rainbow axolotl you need to create a chain of command blocks that each set the Axolotl’s variant to a different one. At the time of me writing this post, there are 5 different colors: pink, brown, gold, cyan, blue.

Take each command from the section above and put it in command blocks, 1 by 1. If you want to exclude a color, do not make a command block for it. Here’s how you can do it with command blocks and repeaters: 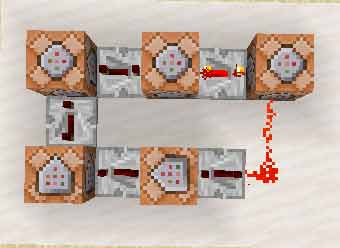 Another option that you can customize is the speed of the pattern. You can modify it as you wish by changing the delays on the repeaters or by adding more repeaters.

To start the pattern, power any repeater (you can do so by placing a lever on the command block). You should then either remove the power source (in this case, the lever) or turn it off. This creates a redstone clock that will keep running and powering itself.

What is a jeb_ sheep (rainbow sheep in Minecraft)?

There is an easter egg in Minecraft that allows you to create a “rainbow sheep”. I’ve shown this in my name tag tips & tricks in Minecraft video. It’s very easy to do - just put a name tag in an anvil, change its name to jeb_ without the quotes and use the name tag on a sheep. The sheep will start to change colors. Since this hidden Minecraft secret uses jeb_ (Minecraft developer), I assume it is him that added this easter egg :)

How to make a rainbow axolotl in Minecraft - video

Additionally, here’s a video about cool things you might not now about this new aquatic mob added to Minecraft: