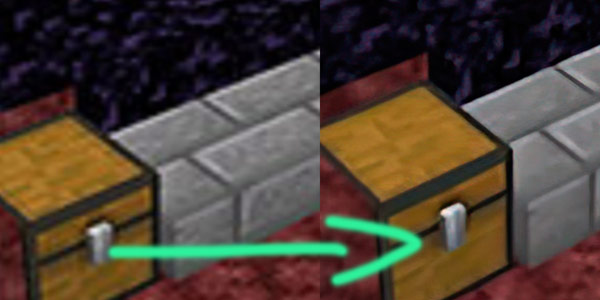 Can you use neural networks to upscale Minecraft screenshots and how well does that work? In this article I want to try to answer these questions and perform some tests with before and after photos of an AI photo upscaling software which was not trained on Minecraft. I’m going to be using Gigapixel AI for this as it offers a straightforward upscaling process and an easy interface to work with which anyone can use.

What is AI Upscaling?

How are images upscaled with AI?

Traditional upscaling begins with a low resolution image and attempts to improve its visual quality at higher resolutions. AI upscaling is a different approach. Given a low resolution image, a deep-learning model predicts that a high-resolution version will be generated. This would make the image look identical to the original low-resolution one. A neural network model must have been trained on thousands of images in order to predict how the upscaled images will look. The AI model can then be used to take low-resolution images or video and create incredible detail and sharpness that no other scaler can match. The edges look sharper, the hair looks less scruffy and landscapes appear more vivid with stunning clarity.

AI upscaling is best explained to humans by the fact that the software can recognize objects like grass, leaves, or hair and fill out the missing details in the original image. It would be more accurate to state that upscaling is powered in part by algorithms that recognize contrast patterns found in real-world scenes. An upscaled engine uses cues from source material to determine what the footage would look like in native 4K and 8K. A 720p scene of grass will lose some of its clarity. However, the “patterns”, which attempt to restore some information, can help to preserve some of the grass blades’ smooth edges and green tonal contrasts.

How are images upscaled without AI?

Basic upscaling allows you to stretch a lower resolution image onto larger displays. To fill in all pixels on the larger resolution display, the pixels from the lower resolution image can be copied and used again. Filtering is used to smoothen the image and to remove any jagged edges left by stretching. This results in an image that can fit on a 4K or 8K screen, but may appear blurry or muted.

Note!: You should zoom in to see the results better. You can zoom in on your phone easily, and on your computer press CTRL and +

At just 600x300 input, the software doesn’t have much to work with, but it’s its job to figure how to upscale it from such a small resolution, and neural networks in general seem to be able to do a good job on doing exactly that.

I’ll be using the software’s recommended 600% (6x) upscaling setting, which will bring up the image resolution to 3600x1800.

Before / After AI Upscaling

When comparing the original 600x300 image to the AI upscaled (3600x1800) image downscaled to the same size as original, the results can be seen and there are some improvements, but the most impressive result is comparing the original image zoomed in or resized to 3600x1800 with the enhanced image at 3600x1800 – subjects begin to stand out from the background and are much more defined. Overall, there is less blur and more detail to the screenshots.

If your goal is to resize Minecraft screenshots to a bigger size, you are pretty much guaranteed to get better results using photo AI upscaling software like Topaz Labs Gigapixel AI.

How to upscale your own screenshots and videos?

There are standalone AI scaling tools available for Mac and PC. These software packages are not intended for real-time scaling, but they are great for enhancing blurred images, video, or in-game screenshots. Video Enhance AI is one of the best around for videos. Video Enhance AI is a great tool for creating videos. Drag and drop files onto the interface and choose an upscaling profile. Different profiles have different AI styles. This results in different upscaling intensities and image characteristics.

On the other hand, Gigapixel AI is perfect for upscaling photos, in-game screenshots and even textures from games. As seen in the results above, it is better to upscale the images with neural networks rather than going the usual way, although the results are most visible at higher resolutions than the source image.

Topaz Labs claims that upscaling HD to 8K takes only two to three seconds per frame when using a NVIDIA GTX 1080 graphics card. Even with the most powerful computer, we are not close to real time processing. This allows the software to use more complex AI processing, which allows it to push resolution-limited videos and photos a bit further.