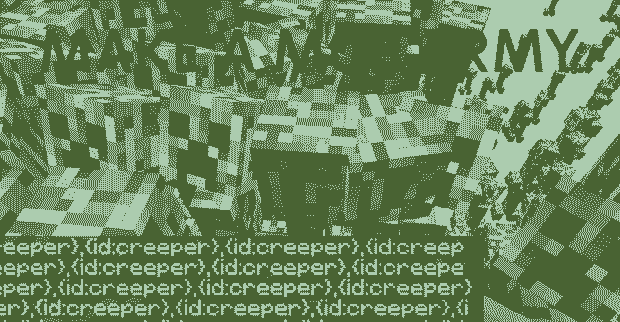 With this online tool you’ll be able to summon a mob army in Minecraft with just a single command. A little bit further down in this article I’ll also teach you how to summon multiple mobs in Minecraft at once without any tools in game, it’s quite simple!

To use this, input the mob that you want to make an army out of and input how many soldiers you’d like to have in your army .. or in the other words, enter the entity id and how many entities you’d like to summon from the command.

TIP: Multiple commands from the multiple mobs summon generator can be combined into a single one using the one command generator in Minecraft

How to summon multiple mobs at once in Minecraft

It’s actually quite simple to make a command in Minecraft that will summon multiple entities or mobs at once, here is the base command for you to modify and play around with:

You summon an area effect cloud entity with “passengers”. After you run this command you’ll get literally what you asked for, except the cloud – it will disappear. The “passengers” will then “disembark” the “vehicle” since it’s no longer there. You can fit a lot of mobs in the command, but it’s likely that you will need a command block as it has a higher character limit. If the limit of the command block’s maximum command size is still an obstacle, lower the amount of entities in your command and instead run it multiple times, either by activating the command block multiple times, or with a .mcfunction file and/or a datapack.

How to add more entities

Like that! Notice the extra ,{id:creeper} that I added in the command? That’s right, you can stack any type of entities together. Just keep adding them between the square brackets [].

You can make the command much more interesting

The {id:creeper} part of the command, with creeper being any entity in Minecraft, is actually very customizable. You can make the command a lot more interesting by adding other attributes to the command, for example the NoAI:1 tag like this:

This will summon 2 normal zombies and 1 “dumb” creeper without an AI. The zombies will run around, but the creeper will just stay in your Minecraft world doing nothing. You can make mobs silent (Silent:1), float (NoGravity:1) and much more! Fortunately, it’s possible to easily add these tags in the generator like this:

I added the tag after the entity id, separated by a comma. You can add as many custom tags as you want, just make sure that they are separated and don’t put a comma at the end. Now you’re ready to make your own epic Minecraft mob battles with zombies in enchanted gear with the strongest weapons in the game. 😀

Watch this Minecraft tutorial to better understand how it works, how to use the generator, some tips and tricks on making commands like these and of course, how to summon multiple mobs at once in Minecraft.